Next Willy Nilly: v15 - Sunday, February 26, 2023
The Willy Nilly is an individual and free-form version of an annual season-opening bicycling spin that happens on beautifully weird Vashon Island.
Willy Nilly Basics
> Registration/fees: None (for the record: this is not a ride that is in any way intended to be organized for, or by, anyone...it should be considered solely as, um, performance art...yeah, that's it...)
> "Ride your ride": Willy Nilly riders choose their ride details...start time, route, distance, pace...lycra, wool, or denim...maybe some road, gravel, or single track (there are trails on Vashon)...
> Typical start: Outside (south side) of Beveridge Place Pub in West Seattle
> Typical finish: Beveridge Place Pub (we believe in post-ride re-hydration)
> BPP to Fauntleroy dock: map
> One of many Vashon routes (a "standard"): map
Scroll down to view hastily-scribed blurb posts about past Willy Nillys...
Click here to sign up for Willy Nilly ride news
Willy Nilly Gear
> Willy Nilly t-shirts (100% of price mark-up goes to kids' cancer): view/purchase
Willy Nilly History
In January 2009 a handful of cycling friends (or drinking colleagues, depending on your perspective) were discussing options for a wintery group road bike ride to kick off a new season. None of us were game for the iconic Chilly Hilly on Bainbridge Island. While the Chilly Hilly does an amazing job of inspiring thousands of riders to register and ride the beautiful designated route, this kind of ride just wasn't our cup of tea. To each their own, right? We decided to ride a more personalized and free-form ride on the same day as the Chilly Hilly, in solidarity with the herd to the north of us, and thus the present-day Willy Nilly was born.
The name "Willy Nilly" was originally a nickname for a one-time ride that happened on Vashon Island in February, 1993 following the first inauguration of President William "Willy" Clinton. During the 2009 discussion referenced above, someone (let's call him "Brad") related the story of participating in the 1993 ride. We loved the name. We loved riding on Vashon. Willy Nilly rhyming with Chilly Hilly seemed an obvious sign of encouragement. Shazam.
Click here to sign up for reminders about upcoming Willy Nilly rides 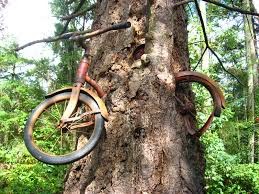 In the true spirit of Willy Nilly (not to be confused with the Pell-Mell, the
Chilly Willy, or the dreaded Wet Willy) it turned out that two parallel rides

Ferry wave 1: One minor hitch at the start...one of us (ahem), with the previous night's source of debauchery still coursing through his veins, had to sprint home for forgotten bike shoes and thus barely made the ferry by driving aboard. A group of 7 riders (Brad C, Manny C, Rob M, Greg H, Phil W, Erik G and John D) navigated the classic Vashon loop, including some cross-training at the outdoor exercise bike installation (above). During the return stretch we decided to stop for some bloody Marys/Caesars, bacon (for those of the group who are carnivores) and red potatoes at The Hardware Store in the village of Vashon. From there some decided to high-tail it to the dock (some of us chose not to notice), and a technically complexified flat repair caused three of the riders to miss the targeted departing ferry. Nevertheless, everyone arrived at the Beveridge for beer, barleywine, and Zeeks pizza in time to catch an epic US/Canada Olympic hockey game...at least one Canuck will never have to buy his own drinks, eh?

Ferry wave 2: A sweeper team of 3 riders (Dave C, David E and Mark W) stormed the Vashon ferry beachhead and surely wreaked their own brand of havoc upon the sleepy, weird island enclave.

Next year: It's time we diversify!

Honorable mentions: John J couldn't make the ride, but drove across town to show team support at game time. Scott S induced his understanding wife and infant daughter to make a similar trek and appearance at the Beveridge. And Kris S, well, we simply honor Kris because we know that he is with us in spirit ("sipping coffee" in Amsterdam), as a phantom sag-wagon far off the back of the last Willy Nilly rider, making us feel at once superior and guilty. We love you, Iceboy.