Next Willy Nilly: v15 - Sunday, February ??, 2023
The Willy Nilly is an individual and free-form version of an annual season-opening bicycling spin that happens on beautifully weird Vashon Island.
PLEASE NOTE: We urge everyone who rides their bike, whether on Willy Nilly day or any other, to know and follow all relevant COVID-19 safety requirements and recommendations.
Willy Nilly Basics
> Registration/fees: None (for the record: this is not a ride that is in any way intended to be organized for, or by, anyone...it should be considered solely as, um, performance art...yeah, that's it...)
> "Ride your ride": Willy Nilly riders choose their ride details...start time, route, distance, pace...lycra, wool, or denim...maybe some road, gravel, or single track (there are trails on Vashon)...
> Typical start: Outside (south side) of Beveridge Place Pub in West Seattle
> Typical finish: Beveridge Place Pub (we believe in post-ride re-hydration)
> BPP to Fauntleroy dock: map
> One of many Vashon routes (a "standard"): map
Scroll down to view hastily-scribed blurb posts about past Willy Nillys...
Click here to sign up for Willy Nilly ride news
Willy Nilly Gear
> Willy Nilly t-shirts (100% of price mark-up goes to kids' cancer): view/purchase
Willy Nilly History
In January 2009 a handful of cycling friends (or drinking colleagues, depending on your perspective) were discussing options for a wintery group road bike ride to kick off a new season. None of us were game for the iconic Chilly Hilly on Bainbridge Island. While the Chilly Hilly does an amazing job of inspiring thousands of riders to register and ride the beautiful designated route, this kind of ride just wasn't our cup of tea. To each their own, right? We decided to ride a more personalized and free-form ride on the same day as the Chilly Hilly, in solidarity with the herd to the north of us, and thus the present-day Willy Nilly was born.
The name "Willy Nilly" was originally a nickname for a one-time ride that happened on Vashon Island in February, 1993 following the first inauguration of President William "Willy" Clinton. During the 2009 discussion referenced above, someone (let's call him "Brad") related the story of participating in the 1993 ride. We loved the name. We loved riding on Vashon. Willy Nilly rhyming with Chilly Hilly seemed an obvious sign of encouragement. Shazam.
Click here to sign up for reminders about upcoming Willy Nilly rides

In my experience today's generally understood meaning of this answer is either "meh", or perhaps even "something less than great, but don't ask me to provide details".

This year's Willy Nilly was better than "nice". It was a bike ride on Vashon Island in the summertime, and by any measure a stunningly lovely ride. It just lacked...meteorological character. 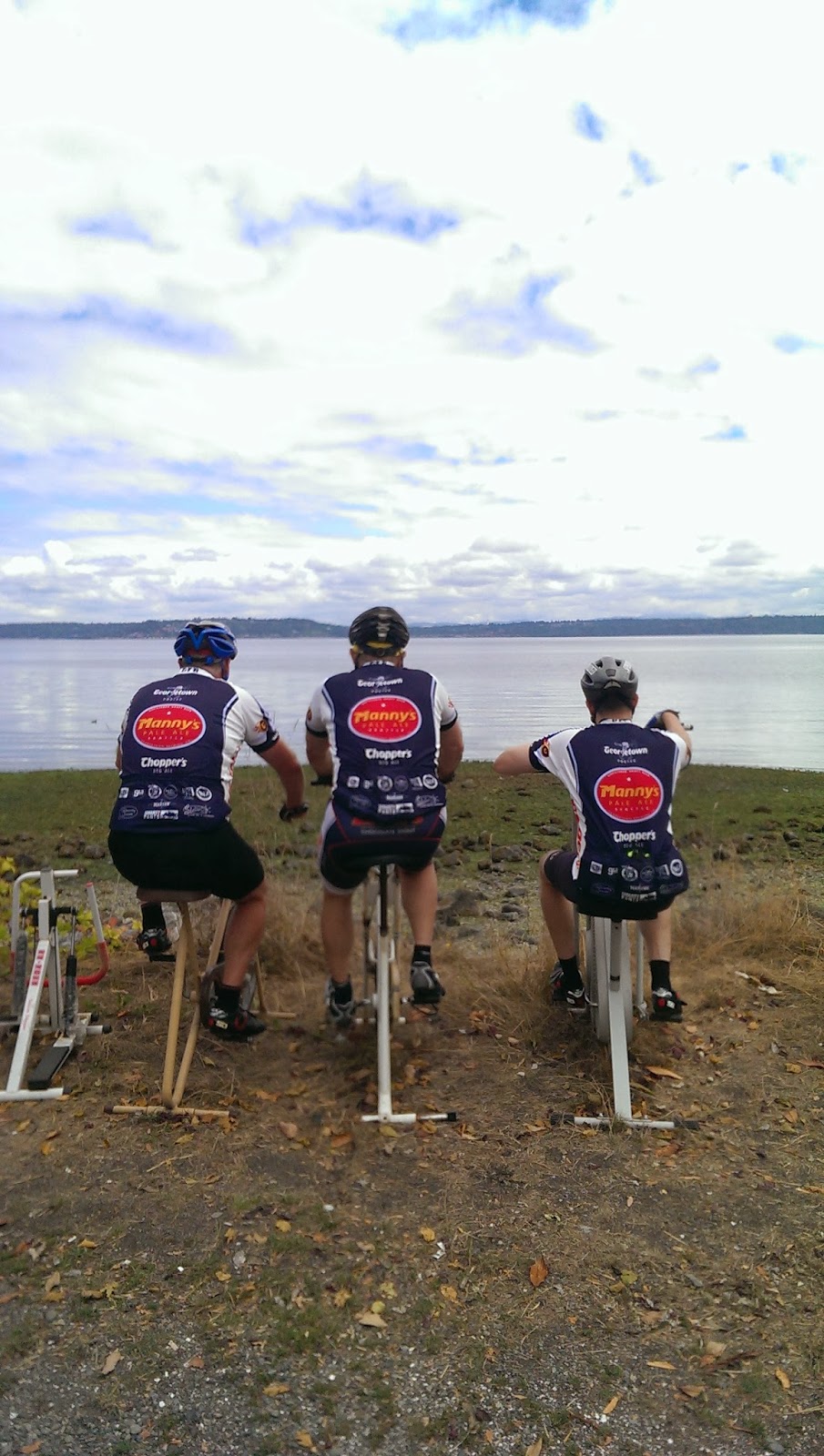 This year it was suggested that we roll with the Willy Nilly not only on a different island than the Chilly Hilly is held, but also on a summer day that is six months opposite of the iconic season opening ride. And that's what we did, with the following results:

> Somewhat surprisingly, a smaller crew showed this year for a mild-weathered late-summer ride versus the number that have turned up at previous bone-chilling Willy Nilly rides
> Camaraderie was not quite as hearty as when we share weather-induced pain and suffering
> The Bloody Marys, Caesars (Marys made w/Clamato), and Admirals (Caesars made w/gin) at the Hardware Store were as delicious as ever
> The image shown here of participants taking a mid-ride spin on exercise contraptions might have been easier on the eyes had the riders been covering their lycra with the layers of chilly-weather covering that is typically required during a February Willy Nilly...just sayin'.