Next Willy Nilly: v15 - Sunday, February 26, 2023
The Willy Nilly is an individual and free-form version of an annual season-opening bicycling spin that happens on beautifully weird Vashon Island.
Willy Nilly Basics
> Registration/fees: None (for the record: this is not a ride that is in any way intended to be organized for, or by, anyone...it should be considered solely as, um, performance art...yeah, that's it...)
> "Ride your ride": Willy Nilly riders choose their ride details...start time, route, distance, pace...lycra, wool, or denim...maybe some road, gravel, or single track (there are trails on Vashon)...
> Typical start: Outside (south side) of Beveridge Place Pub in West Seattle
> Typical finish: Beveridge Place Pub (we believe in post-ride re-hydration)
> BPP to Fauntleroy dock: map
> One of many Vashon routes (a "standard"): map
Scroll down to view hastily-scribed blurb posts about past Willy Nillys...
Click here to sign up for Willy Nilly ride news
Willy Nilly Gear
> Willy Nilly t-shirts (100% of price mark-up goes to kids' cancer): view/purchase
Willy Nilly History
In January 2009 a handful of cycling friends (or drinking colleagues, depending on your perspective) were discussing options for a wintery group road bike ride to kick off a new season. None of us were game for the iconic Chilly Hilly on Bainbridge Island. While the Chilly Hilly does an amazing job of inspiring thousands of riders to register and ride the beautiful designated route, this kind of ride just wasn't our cup of tea. To each their own, right? We decided to ride a more personalized and free-form ride on the same day as the Chilly Hilly, in solidarity with the herd to the north of us, and thus the present-day Willy Nilly was born.
The name "Willy Nilly" was originally a nickname for a one-time ride that happened on Vashon Island in February, 1993 following the first inauguration of President William "Willy" Clinton. During the 2009 discussion referenced above, someone (let's call him "Brad") related the story of participating in the 1993 ride. We loved the name. We loved riding on Vashon. Willy Nilly rhyming with Chilly Hilly seemed an obvious sign of encouragement. Shazam.
Click here to sign up for reminders about upcoming Willy Nilly rides

It's no secret that Willy Nilly is, by definition, a Conspiracy among participants to pursue an alternative to the status quo of season-opening bicycle rides. But there's more to this wicked story.

We have it on good authority - that is, from some very fine random people on social media - that this dangerous Cabal of bicyclists includes Seitan-worshiping foodies, as well as a disturbing variety of PedalStyles...and beware, they're very cold-blooded  (especially while they're bicycling in damp, 30-40 degree weather). 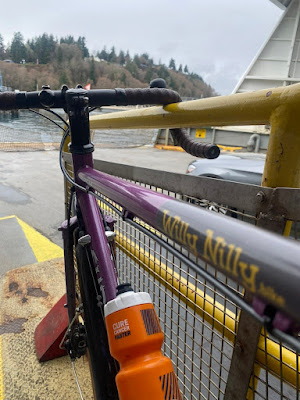 Now, we've come to learn about some damning new details. Apparently, due to a late night of worshiping live music and whiskey on the eve of Willy Nilly v14, one of these dastardly agents got off to a much later start to their Willy Nilly ride than they'd originally planned...inadvertently resulting in their first solo Willy Nilly.

Upon arriving on Vashon Island, this threat to established world order pedaled directly to one of their Cabal's secret Pizzeria field operation meeting places (Snapdragon Bakery & Cafe, in the town of Vashon). 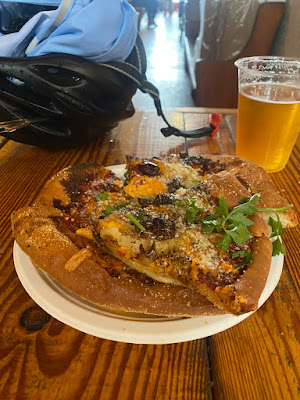